2014: A story of success at Balata High School

We donated 10 laptops, a data projector and a digital video camera to Balata High School in Tavua. All this gear was secondhand. The laptops and the data projector came from the Queensland University of Technology. The digital camera was given to us by my friend Kazunori Nozawa, Professor at Ritsumeikan University, in Kyoto Japan. The school received these donations in June last year. Edubuntu/Ubuntu operating systems were installed on the laptops.

One of the conditions of donation is that the schools give us an update of how these resources are used. We also request schools to provide evidence of the impact that these technologies are having on students’ work.

Late last year, I received a detailed report from Mr Segran Pillay – Principal at Balata High School. I was truly amazed at the range of different activities in which laptops, data projector and video camera were being used. It shows the commitment of Mr Pillay and his staff towards ICT integration. More so it shows their innovative capability and their ability to think outside the box. From an education perspective, technology on its own does not make a difference on it’s own – teachers’ do. Teachers’ and school leaders like Mr Pillay play a significant role in integrating technology in school activities. Without a collaborative and determined effort, technologies such as computers will never realise their full potential.

I take this opportunity to commend Mr Pillay and his staff for a magnificent effort. The school management have also been very supportive of this initiative. I think with limited resources the team at Balata have demonstrated some very productive outcomes. Keep up the good work and all the best in 2014. 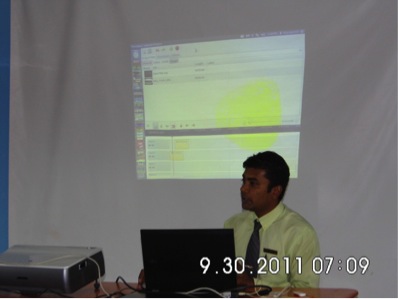 Here are parts of Mr Pillay’s report – it is very impressive. It highlights the challenges and achievements. What is equally satisfying is his vision and determination to create new opportunities for his teachers and students with ICT.

Balata High School is situated 5 km from Tavua Town along the Nadarivatu Road. The school had 235 students in 2013. These students are from Forms 3 to Form 7 and the school also has a vocational center for boys.

The school was established in 1976. There are 2 streams of students from Forms 3 to Form 6. Most of the forms have a class roll of 30 students which is an advantage considering that many urban schools in Fiji have rolls of over 40.

The school is a level 3C school and has 18 staff most of whom are experienced teachers.

The school has a Computer Lab and when is mostly used for students of Forms 5 – 7 doing Computer Studies as an examinable subject. Furthermore, students of forms 3 and 4 use the same lab for Office Technology classes. In addition, every form gets a 40 minutes session a week for Co-Computer lessons.

The computer lab has 5 new desktops donated by the Canadian Embassy in 2012 through the Vodafone ATH and Fiji Council of Social Services. Three old Pentium 4’s also are working in the lab. The lab is yet to receive an air conditioning unit from the school management.

It was a blessing for the school when a set of 10 laptops, a multimedia projector and a Sony video camera was given to the school as part of the SEE PROJECT led by Dr Vinesh of the Queensland University of Technology.

Considering the busy schedule of the Computer Lab, we decided by to have a separate room for the laptops. After much thought and with a vision to prepare senior students for tertiary institutes, the Form 7 students were shifted to the Music Room and the partitions of their room was opened to make a lecture theatre and media room next to the school library. This room is about 25ft by 45ft in is an ideal room for lectures and presentations.

Work first began on the safety and the Vocational teacher and students assisted by putting on burglar proof grills on the windows and doors of the Ubuntu Lab. A white canvas material 3m X 3m was bought to be put on the wall at a cost of $150 which was much cheaper than a projector screen. The room was then neatly painted blue and purple and an electrician was called to put up about 20 electrical power points across the room. The school Board members were called to school and the laptops were officially handed over to the school.

By this stage, it was almost July and we were close to the end of the second term.

The school now has a Computer lab and a Ubuntu lab where the 10 laptops are placed. The Ubuntu lab is known to students and teachers as the Media Room and the laptops are placed on the sides and the middle section has desks for students to sit when presentations are made through the multimedia projector.

The projector, laptops, and camera has in the last few months being used for the following:

While the school had also wanted to move the musical equipment to the media/ubuntu lab, this was stopped as the dream of ICT at Balata would have been diverted in another direction.

The following challenges were met this year:

Introduce white board software that is to be used for teaching – open Sankore is a basic one and can be used on both Ubuntu and Windows. If used well – teachers can make videos of their teachings by screen capturing software. Since there is only one projector – teachers can use this concept when coming to the Ubuntu lab as part of the ICT Integration programme. Other LMS like Haiku and EDU20 can be used for assignments, notes, etc and class shares can be created on school server to store notes and videos.

The rooms upstairs is the new Ubuntu lab / Media Room [24ft X 45ft]. They used to be the Form 7 and optional room. It has now become a Computer Lab and Lecture Theatre. The school management had to put up Burglar proof grills, complete electrical for the first stage.

The basement will be converted to a common staffroom so networking becomes much easier. 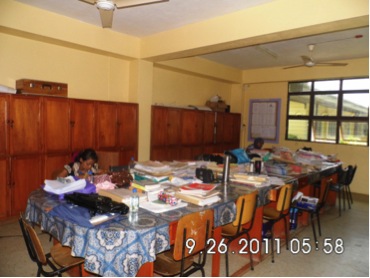 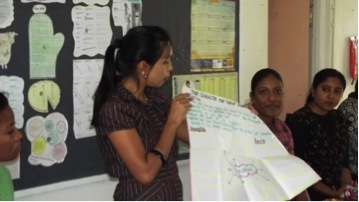 Teachers presenting their teaching aids – this is a weekly activity at school. The first photos were taken before the arrival of the laptops and projector.

Science HOD trying to use an added screen prior to the arrival of the projector for his Form 7 Biology class.

Prefects having a session with reps from Vodafone ATH and Fiji Council of Social Services prior to the arrival of the projector. As from Term 3, the Student Council have their meetings in the Ubuntu Lecture Theatre. 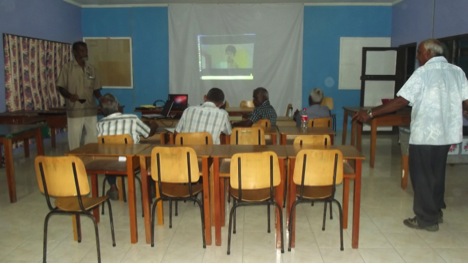 Board Members having the first feel of the laptops and projector. I am trying to show them the movie “Taare Zameen Par”. The Laptops are placed on tables on the sides and the middle group can focus on the projected screen.

The Sony camera partially used for recording scenes in the school short film and the Dell laptop used in one of the scenes. The laptop also used for the above poster that was printed and put in 500 newspapers that Saturday.

Ministry of Health officials with a presentation using their own projector in the Ubuntu Lab. 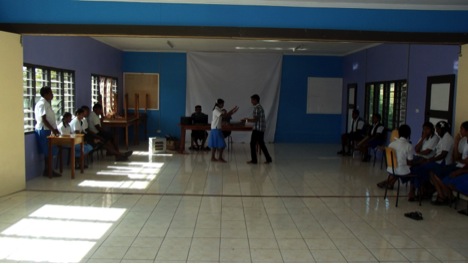 Students rehearsing for items in the Media Room. This has been stopped as it required a lot of movement of laptops from the lab to Office.

Chief Guest for Diwali Celebration – Mr Pranesh Prakash. Students eagerly waiting for the presentation on the story of Diwali which was presented in slides and narrated by a Form 3 student. Teachers plan to record a 10 min short video on the same for next year. 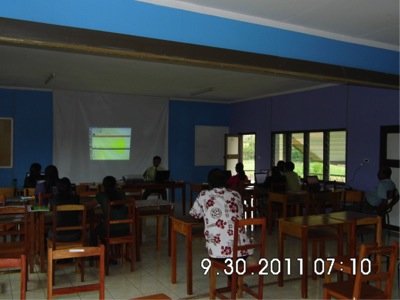 Principal taking a session on how to use laptops and internet to teach effectively to the digital natives. 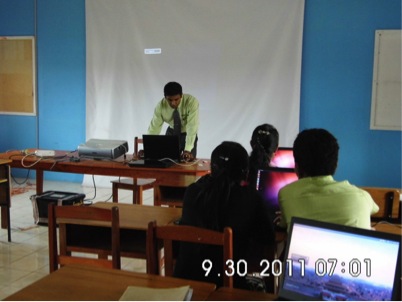 Class in the old Windows Lab

Form 7 Room. There are massive plans to incorporate ICT into the teaching of Form 7 in 2014 and change their high school method of teaching to Foundation level. 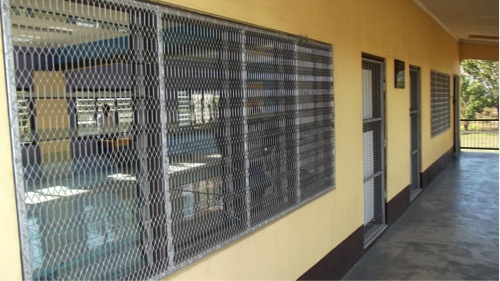 The new burglar proof grills for the new Ubuntu lab

The Librarian trying a new Ubuntu lab. She has moved to Ba and the school has advertised for a new Librarian. We seek a person who can transform the place from manual method of recording to a whole new place where students come to research, read books and also e-books.

Management looking at the new set of technology. There are eight tables that hold eight laptops – catering for eight groups. This is reasonable as one laptop is normally shared by 3 – 4 students only.

Vocational students working on the grills for the media room in Term 2. Photo taken by the Sony Camera given with the laptops 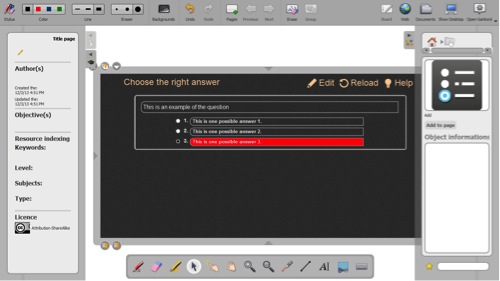 2 Responses to 2014: A story of success at Balata High School