Posted on September 14, 2011 by theseeproject

Wednesday morning about 7 AM. I am reflecting on my thoughts in the bure house at the resort. Yesterday was a good day. We took the children around to Voua village and took lots of photos.  The children were very well behaved. Lepani took us around and I also got a chance to meet a number of villagers – some I hadn’t seen for a long time. For almost 25 years to be exact. It is amazing how time changes and how people age. The memories that you have some of them and seeing them 25 years later is sometimes difficult to comprehend. I bumped into Siti, Semesa –the last time I saw them they were much younger– time does fly. It was also very interesting to see how the village has evolved over time.

One thing that struck me was the design and construction the houses. Bure houses seem to have long gone. These houses have been replaced by houses made of brick, timber, and corrugated iron. It makes sense to make houses this way given that cyclones are very frequent in this part of the world. While on the one hand it was pleasing to see the changes that have occurred, on the other hand it would have also been good to capture some of the images and videos of the village as it changed over time. But this could not have been done because cameras were very much a technology that were in the hands of the rich and the professionals. But now increasing affordability and capability of these technologies means that everyone can participate in telling a story of the changing times. This visit has prompted me to think about how digital stories can capture the evolution of the world and its people over time. Most of us can participate in this journey.  Engaging students in the craft of digital storytelling at the school level is probably the starting point. Such an opportunity can also extend and enhance the school curriculum in unseen and remarkable ways.

The church in Voua village

One of the senior education officers from the Education Office in Sigatoka – Mr Albert Wise visited us. He was interested in our work. He told us that at the beginning of each term the head teachers and school principals in his district meet. The idea of this meeting is to inform these leaders about the key issues that need to be dealt with each term. This meeting was scheduled to be held at another location. However, after seeing the work that we had started at Naidovi, he decided to shift the meeting to the school. He invited us to address us  the principals and head teachers. He also wanted us to showcase some of our work that we had started in the areas of library management, ICT integration, and robotics. We were very pleased to see his level of interest and the fact that he rescheduled this meeting meant that the work that we were doing was of some value to education in Fiji.

Lunchtime yesterday was special. Students in the robotics club who had spent time building the robots got the opportunity the programme and run them. To my knowledge, LEGO robots were probably run for the first time in a primary school in Fiji. If I have made this assertion incorrectly, then the claim that I would like to make is that it happened for the first time in a primary school in Fiji. The excitement in the children’s eyes was evident. One thing that I learnt from this was that no matter where the children are – if you design interesting learning activities they will engage. Digital divide for once did not seem to exist in the learning environment that these children were working in. Thanks to my good friend Eugene and Semia in China for the donation of these robotics kits. Without their support these children probably would have never had the opportunity to put their hands on one of these robots. The world probably needs more individuals like Eugene who dig deep to make these things possible.

After lunch visited we the Indian community behind the school. We took lots of photos the students thoroughly enjoyed the outing. Even though they probably didn’t go any more than 500 m from the school, the fact that they went as a class seems to have made the experience enjoyable. Some of them probably walk on the same path and road to get to school, walking with classmates and pointing out areas of interest for the photos made all the difference. Teachers also said that such opportunities we rare -they also saw the value in this experience. Here too, I bumped into people who had changed so much since I saw them the last time.

The day was very busy. As soon as I got back, I headed with the year three students to  Hanahana village. This village is directly across the school. The last time when I lived here, this village did not exist. It used to be Sakiusa’s sugarcane farm. Most of the people who live here have come from other parts of the country. The people who live here are mostly hotel workers. Lepani was once again our guide here. He got back to the school with us with his guitar and sang some songs. I admire his talent. Almost all people who live in the village and have musical talents have gained this through their own efforts. They have developed these skills by either observing an elder (cognitive apprenticeship) or by trying and trying and trying…until they mastered the skill. I also wrote a press release because the ministry wanted one – however I later learnt that is did not get anywhere. 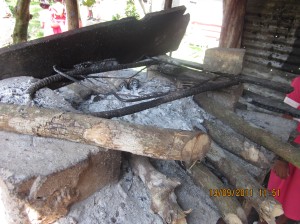 After school was over I did the usual short professional development session with the teachers. In the evening I went back to the school because some teachers were quite interested in knowing a bit more about what technologies were out there. To my surprise some of the members of the community also came. I felt a bit sorry for some of them because I had a conversation in English and probably talked about something that didn’t quite matter. Maybe next time when I go I will do a special session on how we found our ancestors in India. But this time I will ensure that I speak Hindi. We had a nice dinner with Mr Sashi and Mrs Lalita Kumar – the head teacher and his wife.

Kamal and I used to be at school together

In the last few days that I have been here I am quite amazed at how the school has evolved in terms of how the community is welcome here all the time. During the day there is a constant stream of parents and villagers. In the afternoon the school grounds are used for soccer training. Back in my time it was quite different. There was a very distinct boundary between the school and the community. The school headmaster makes a very big difference in terms of how the parents and community engage with the school. The Head Teacher, Mr Kumar seems to welcome everybody with open arms. Perhaps one of his greatest assets is that he is very fluent in the native Fijian language apart from Hindi and English. He also seems to have a very charming personality and that seems to ripple throughout the school. Maybe one day all schools will function this way!

Jone – a parent and a friend

This entry was posted in 2011, Teaching and tagged Naidovi. Bookmark the permalink.